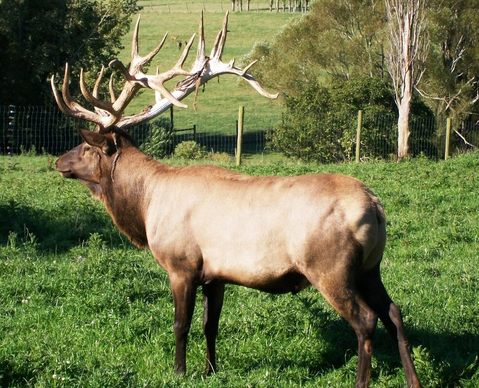 We do not select specifically for trophy antler but history has shown that a number of bulls sold at auction have gone on to produce impressive trophies.

Wapiti bulls are usually 7 or 8 years old before reaching their potential as a trophy. There is a very real option to buy a Tikana bull at 3 years old, use him as a sire and velvet producer then grow him out for the trophy market.

Kobe pictured above was used as one of our herd sires from 2003 until 2011. He was Champion of Champions at the National Velvet Competition in 2007 and at 10 years old cut 19.9kg of EWSupremeTM velvet.  As a 12 year old we grew him out into hard antler where he measured up an impressive Non Typical 449 IOA (Inches of Antler).


Due to the quality of velvet Tikana genetics produce, it is by default that they can end up being quality trophy when grown out to hard antler

The examples below are some bulls grown for trophy and almost without exception their value as a trophy has far exceeded their original purchase price. < Barack pictured at left