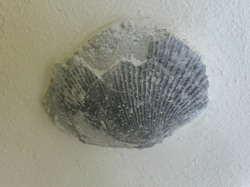 Our farm is at the northern end of the Forest Hill range. The range lies to the east of the Southland plains. Fossils such as the scallop shell shown are embedded in lime rocks found on the farm. Their presence indicates the property was underwater some 20 million years ago.

The forest hill range contains the 500 hectare Forest Hill Reserve. This is a unique remnant of the native forest that originally covered most of Southland - typically a podocarp and rata-kamahi forest. Great examples of Podocarps can be seen:- Matai, Rimu, Totara and Kaihikatea ( the first three grow for 800 to 1000years old while the later for 600 years). 2005 marked the fall of a magnificent 500 year old Rata.

For six centuries prior to the arrival of Europeans, Murihiku (Southland) was home to Maori - Ngati Mamoe and Ngai Tahu ancestory. While they mostly lived around coastal areas Forest Hill was an established mahinga kai (food gathering) route that was visited seasonally by tangata whenua. Forest Hill also provided a plentiful source of rongoa rahau (plant remedies) used as part of the traditional Maori healing system. 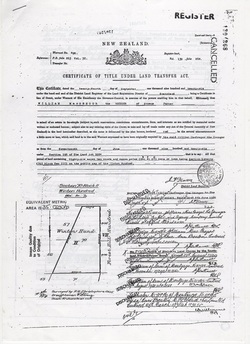 A European community was established in the area in 1861 and included among them was William McGregor from Caithness in Scotland. One of his sons was William McGregor (Jnr) who as a WWI veteran was provided with a settlement farm. The title to this 35 hectare farm shows that it was first owned by William McGregor (Jnr) in 1926. At that time the entire farm was forest and swamp. Hard labour by the original owner and six subsequent owners sees the entire farm now in productive pasture.
We purchased the farm in 1995 and named it Tikana.
TOPOGRAPHY AND SOILS

Tikana is located 100 to 140m above sea level.
The farm comprises 35 ha of rolling hill country which lies to the north. There is a creek running through the farm which is a contributory to the Otapiri Stream.
The farm is a predominantly Te Mara soil type with a small area of Makarewa soil type adjoining the creek. The Makarewa soils comprise fine alluvial soil which has deep rooting depth and poor drainage and reflects that area of the farm which historically would have been swamp.
The Te Mara soils comprise limestone loess and colluvial soil with deep rooting depth and medium clay content in the topsoil.
In relation to Environment Southland’s Land and Water Plan, Tikana is all in the Bedrock/Hill country Physiographic Zone

Tikana has a stocking rate around 16 Stock Units per hectare.
Routine biennial soil testing is undertaken to determine appropriate fertiliser requirements. Current Olsen P levels range from 24 to 33.  Levels for pH are from 6.1 to 6.5
The creek is completely fenced to prevent stock access. Riparian planting is in place along the creek and winter grazing is managed to minimise nutrient losses.
A Nutrient Budget has been run using Overseer and our Nitrogen loss is 13kg N /ha/yr. Phosphorus lost is 0.5kg P/ha/yr.
As part of our LEP we have a winter grazing plan where critical source areas are avoided and specific action/options are deployed in the event of a severe weather event.

Climate change is a very real issue for which we all must take some ownership. A partnership between the Agricultural sector, Maori and Government saw the formation of He Waka Eke Noa. The focus of this partnership is to equip farmers to measure and manage emissions. The programme has a number of milestones to enable us to meet specific greenhouse gas emission targets.
Logically the first of these was for a farm to know their number ( GHG - net CO2 emissions/ha). You have to know where you are at to be able to consciously make change/improvements. The aim was for 25% farms to "know their number" by end of 2021 and 100% by end of 2022.
We attended a DINZ facilitated workshop in December 2021. There are several accepted systems for making the calculation. We used B+LNZ's GHG calculator. Livestock emissions, fertiliser and lime use, deforestation emissions and vegetation offsets are all taken into account.
The GHG number for Tikana  was estimated to be 3 net CO2 emissions per hectare
A word of caution is that the B+LNZ GHG calculator uses an old SU system for deer and not the current Deer SU calculator on the DINZ website. Furthermore all deer(including Wapiti and Fallow) are considered red deer. Readjusting our calculation for Wapiti meant our GHG number was more like 5 CO2 emissions per hectare.