April 2020 - Mating Firepower
We are excited for the outcome of this years mating.
Crikey who has been used a link sire for a number of Wapiti herds on DeerSelect has now 100 progeny on DeerSelect with more yet to be entered. He is currently ranked second top Wapiti bull for growth traits(Weaning weight, autumn weight and yearling weight) for Carcass weight and Terminal Index.    We are using both Prophecy and Legacy as two year old bulls. Both cut over 10kg EWSupreme as two year olds as well as pretty respectable performance in other traits. Prophecy is a son of Forecaster and Legacy a son of Thor.                                                                      Roosevelt while only a spiker is being used to mate our first calvers. He is a son of Edendale Station's record breaking hard antler bull Seattle. As with any animal used on DeerSelect who is not from a herd being recorded on the genetic database then by default genetic merit for any trait attributable to that animal is zero. Mindful of this, Roosevelt's eBV's will be likely understated and so we very excited  for his future.
Velvet is within herd only but ranking and values of all other traits and index are based on the Wapiti Across herd sire summary- April 2020
January 2020
Our annual sale was again a success with 19 of 21 bulls on offer finding new homes throughout New Zealand. The average sale price at $8900 was up a little on last year and exceeded the reserves we had on them. The star lot Legend (a Thor son) at 3yrs cut 13.1kg EWSupreme as well as being a top 2% bull for growth and meat traits.He sold for $20,000. Congratulations to Next Generation deer farmers Jesse and Traci Saunders who are the proud new owners of Legend.(pictured to the Left) 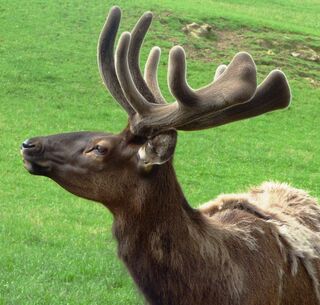 ​December 2019
The 38th National Velvet & Trophy Antler Competition resulted in some notable results for Tikana. The 3 year old bull Devon with a 12.92kg of EWSupreme won the three year old Elk/Wapiti class (pictured). Devon is on offer in our 2020 sale. Tikana has a proud record in this class having produced the winner nine times in the last 10 years. His efforts were overshadowed by Nepia who has staked a place in the history of the National Velvet Competition. Nepia has now been National Champion of Champions three times and Reserve Champion twice. A feat never previously achieved by any deer, Red or Wapiti.

June 2019
Congratulations to Murray Hagen and Jim Cameron of Conemarra Wapiti. Their purchase at our 2018 sale of the Wapiti bull "Forecaster" has proved to be a great investment. Based on the latest Across Herd Wapiti Sire Summary (June 2019) this bull sets new industry benchmarks and records for his genetic merit. A Terminal Index of $47.56, WT12eBV of + 25.6kg and Carcass Weight eBV of 14.1kg ranks him #1 Wapiti bull currently in New Zealand.
​
March 2019
The 2019 Elk & Wapiti Society Velvet and hard Antler Competition was held at Cromwell in February and the 2019 Rising Star Velvet & Hard Antler Competition was held at Outram in March. The honours (top 3 placings) in both competitions went to Tikana bulls. Juggernaut (sire Isobar)8.5kg, Devon (sire Devereux)9.8kg and Hendrix (sire Thor) 8.3kg will all be worth watching out for in future.

Lot 1 Yotam was cut on New Year's Eve. 15.3kg of EWSupreme.
Yotam has the heaviest velvet of any 3 year old bull we have put on the market.
Yotam is a son of Nepia and outperforms his sire by 1.3kg @ 3years old. 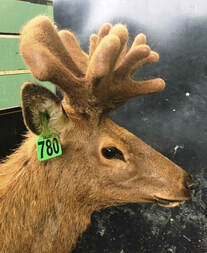 ​December 2018
The 2018 National Velvet & Trophy Antler Competition provided yet more success for Tikana bulls. "Breeze" continued our dominance in the 3 year elk/wapiti velvet class. He is Lot 7 in our upcoming sale and "Celsius" (Lot 5) was runner up. These were the best of the seven three year olds we had velveted at time of competition close off. We will update the 2019 draft of sale bulls as we velvet them.
We were proud to have the top 3 placings in the Open Supreme class with 3 heads all over 21kgs. Nepia once again won this class with a 24.6kg EWSupreme head. He has nine sons in our January 22nd sale.

November 2018
This impressive spiker provides strong endorsement of DeerSelect. Prior to even growing any velvet this bull calf had an exceptionally high BV for mature velvet. I guess it should have been no surprise when we cut this 4kg of spike velvet off him. He is a son of Thor.


July 2018
Currently deer farmers are paid for venison based on carcass weight. Using the Carcass weight breeding value (CWeBV) is a simple way of selecting for more carcass and more dollars in your pocket. The most recent Wapiti Across Herd Sire Summary features 86 Wapiti sires used by Wapiti studs over the last 3 breeding seasons.
The top five Wapiti bulls for CWeBV are all Tikana bred with CWeBVs ranging from +9.0kg to + 10.2kg. At current schedule this represents "money for jam".

May 2018
Mating for 2018 is behind us now and we are delighted with our scanning results. 14 of 15 first calvers are pregnant = 93% which is the best result we have achieved in this age group. (all bulls were removed on 22nd April to ensure no late calvers)
We used Seattle semen from Edendale Station to AI 10 cows and 9 of them scanned in calf. This represents exciting outside bloodlines coming into the Tikana herd.
The Mixed Age cows overall bred well with a 93% conception rate. By foetal aging we know 81% of our cows conceived in March - an important target to ensure the next crop of fawns start on the front foot.


January 2018
Successful bidder for the top bull - Forecaster - at our annual sale was Murray & Beverly Hagen of Connemara Wapiti Stud, Manapouri. Murray paid $38,000 for this outstanding bull. The happy new owner is pictured below with some tokens of appreciation for his support of our sale 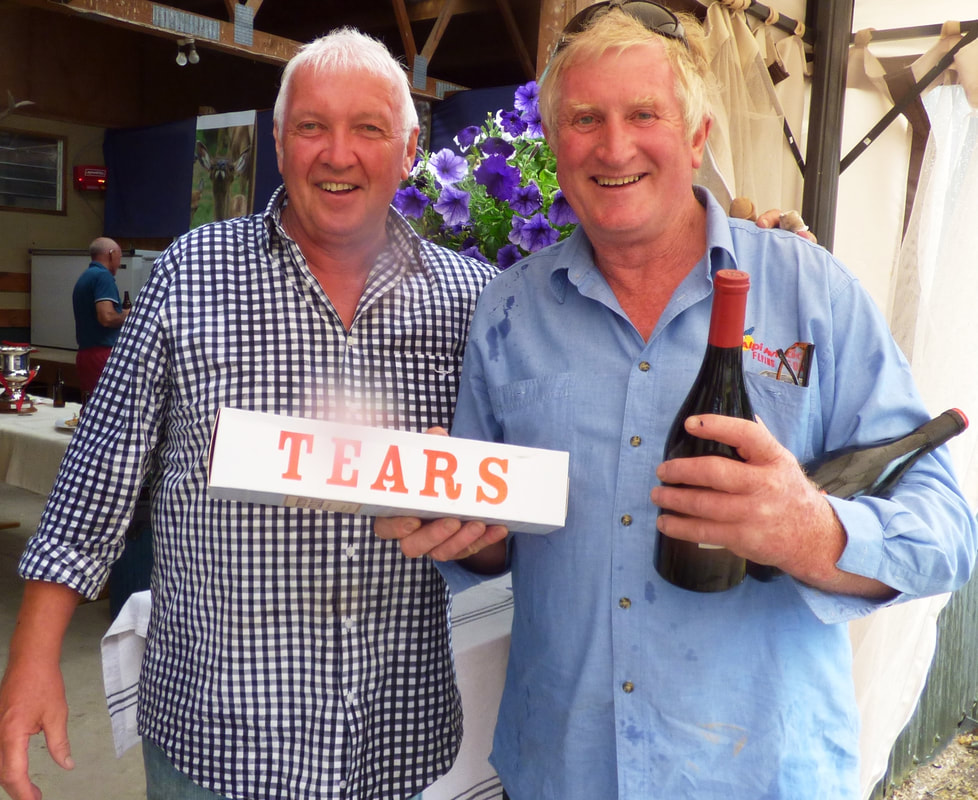 December 2017
Forecaster - he cut 12.2 kg EWSupreme at 3 years this year which earned him the winner's podium at this year's National Velvet Competition (3 year Wapiti class). This follows on from his champion title as winner Two Year Wapiti National Rising Star Competition last year. Even more impressive than his velvet Forecaster has a WT12eBV of +19.06kg. He has a Terminal Index of $37.64 which puts him well clear of the top 3 sires(all Tikana bred bulls) in the latest (December) Across Herd Sire Summary.
November 2017
Isobar is no doubt one of the star lots in our 2018 sale. He is a former winner of the Two year old Wapiti National Rising Stars Competition but as you can see with a great span and classic blades he has very good trophy potential. This year he cut 16.4kg EWSupreme. An all rounder Isobar ranks as the 3rd top bull of all Wapiti sires for Terminal Index in the latest (November) Across Herd Sire Summary 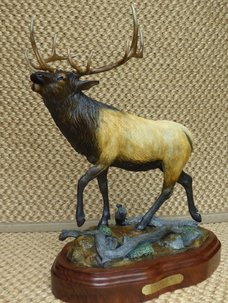 August 2017
Draft of 2018 Sale bulls now available.
We have detailed the likely bulls to go to auction in January 2018. This allows all prospective buyers an early opportunity to see what is available. Also we are trialing a new visual presentation of the genetics and BVs of these bulls. The traits we have selected for - growth(WT12 eBV), meat (EMAceBV), terminal index (combination of growth and meat traits economically weighted) and parasite tolerance (CARLA10eBV) are all colour coded based on how these bulls rate for any particular trait against all the sire bulls being used by Wapiti studs in DEERSelect. Are they in the top 50%, or top 10% or even in top 1%? The darker the blue the better. We welcome feedback regarding this new presentation. We know that pages of figures can be off-putting - does this format make it easy? 2018 Catalogue update
A Wapiti across herd sire summary is not available for velvet and so the actual weights are presented.

May 2017
2017 MSD Photographic Awards.
As part of the Deer Industry Conference each year a deer farm related photographic competition is held. We are very proud of our sixteen year old daughter Demi, who was awarded 2nd place for her entry entitled "Follow me boys" as displayed at left


January 2017
The Elk & Wapiti Society celebrated a milestone with their 30 year anniversary. The event featured a fieldday and BBQ at the Ewings' Cattle Flat Station followed by  the 20th  Elk & Wapiti Society Velvet and Antler Competition and awards evening. Dave was awarded with life membership to the society for his contribution to Wapiti and the society over many years. He joins a prestigious group of life members and industry stalwarts:- Sir Tim Wallis, Dr Ken Drew, Tony Pearse, John Barber and Jack Pullar.


December 2016
New Zealand Velvet Record
Our stud sire Nepia this year created history with a new record for velvet cut off a deer in New Zealand with a massive 26.3kg of EWSupremeTM velvet. This saw him crowned once again as Champion All Comers at the 2016 National Velvet & Trophy Antler Competition.
Nepia was also this year the inaugural winner of the handsome bronze Winston Day Memorial Trophy donated by the children and grandchildren of the late Winston Day.

November 2016
First Wapiti across herd sire summary published
DEERSelect after considerable effort have produced Breeding values and Indexes across connected Wapiti herds and the sire summary is now available on the Deer Industry New Zealand website.This is a milestone for the whole deer industry. Commercial deer farmers can compare the genetic worth of any individual animal for a given trait directly across all the Wapiti herds in New Zealand that are linked or connected. There are currently seven Wapiti herds active in DEERSelect.

July 2016
Elk & Wapiti Society of New Zealand – “changing of the guard”
At the AGM of the society this year Dave stood down from his role as President of the Elk & Wapiti Society of New Zealand. Dave has been a member of the society since its inception in 1986, has served on council for more than half of the last 30 years and has been President for the last five years. Stepping down with the society in good heart sees the next generation taking office - John Falconer of Clachanburn Elk takes on the Presidents mantle. A role his late father and former active member, Charles would have been proud to see.


May 2016
2016 MSD Photographic Awards.
As part of the Deer Industry Conference each year a deer farm related photographic competition is held. We are very proud of our fifteen year old daughter Demi, who for the first time submitted entries for this year’s competition. The image on our home page entitled “Curiosity” was one of just two highly commended entries. Demi was rewarded with 2nd place for her “Land of Milk and Honey” image which features on the deer farming page on this website.